Arlington, Virginia is internationally recognized as a model of forward-thinking development and smart growth. Until the 1920’s, there was very little development in the area – yet today almost all of the land in Arlington has been developed, and consists of extensive single-family residential areas as well as commercial, office and multi-family dwelling area. Arlington’s mixed-use development, smart-growth and new urbanism are recognized world-wide.

Arlington’s Rosslyn-Ballston Corridor is one of the nation’s premier transit-oriented corridors and was recognized as such in 2002 by the Environmental Protection Agency (EPA) with a “Smart Growth” award.

International foundations, information technology, telecommunications, aviation and aerospace, and security firms, and bio-tech research agencies flock to Arlington County providing employment for its educated community (more than half of the 189,453 Arlington County population in 2000 have college degrees and a fourth have advanced degrees) with extensive language skills. Arlington’s percentage of foreign-born population is the largest in the Washington DC area. Over 25% of Arlington firms are involved in global commerce. Arlington’s world-class transportation system and technology infrastructure are aesthetically enhanced by a landscape that reflects the beauty and dreams of history. Arlington also is one of the founders of the World Cities Alliance (WCA) and belongs to IncubatorAMERICA (IA). 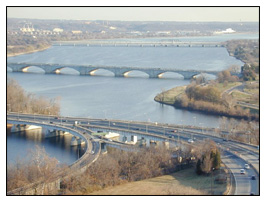 George Mason University boasts over 40 research centers and affiliates including the Center for History and New Media and Hemlock Overlook for Outdoor Education, to the Center for Biodefense and the Mercatus Center.

Located in the Northern VA Region, Arlington is directly across the Potomac River from Washington DC, the nation’s Capitol. Arlington is minutes from the capitol’s major attractions (within three miles of the White House). Frequently Asked Questions about visiting are answered by the Arlington Visitors Center.

But there is much to visit without leaving Arlington. The following are some of the websites of Arlington Attractions:

How Arlington got its name is much debated, but it was clearly a hit, as most states now have a city called Arlington, large cities have streets called Arlington, the USS Arlington was named in honor this county, “Arlington” is the name of Civil War General Robert E. Lee’s home and it is located on the grounds of the Arlington National Cemetery. The Arlington County Seal shows Arlington House.