The greater Silver Spring area is bordered by Washington DC (the nation’s Capitol), Prince George’s County (home to many technological, defense and aerospace firms), and Howard County (which holds a wide range of businesses, from biotechnology to multinational corporations). Silver Spring includes much of the southern and eastern portion of Montgomery County, one of Maryland’s most populated and affluent counties. Silver Spring is the focus of many of Montgomery County’s ‘smart growth’ initiatives and is fast cornering the media market with its attraction to the area of such giants as Discovery Communications and AFI Silver.

Silver Spring is not neglecting its historic preservation. As part of the 1632 King Charles I land grant to Lord Baltimore, there is plenty of history here. In 1830, Francis Preston Blair moved to Washington as requested by President Andrew Jackson. (The Blair House in Washington DC, used by many Vice Presidents as the official home, was built for him). Blair’s daughter, Elizabeth, and her thirsty horse, Selim, found a spring on his country property while riding. Silver Spring is named for this delightful spring which is silvered by sparkling flakes of mica. 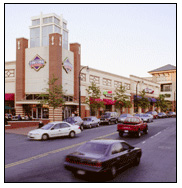 The 1938 Silver Theatre and Silver Spring Shopping Center complex was a significant turning point in the sub-urbanization of Washington, D.C. A classic Art Deco example (designed by John Eberson), restoration is sponsored by the Art Deco Society of Washington in conjunction with the Montgomery County Council. Artists and Silver Spring go together. From the Penguin Mural on the new Silver Spring Metro station to the mentions in the comic strip ‘Zippy” of the Silver Spring Tastee Freeze Diner, art is very much a part of Silver Spring’s history.

Only minutes from the nation’s Capital, Silver Spring is about 45 minutes from the Baltimore Orioles (at beautiful Camden yards) or from Redskins Park; Maryland games (in College Park) are only about 20 minutes. Rehobeth Beach, Ocean City, and Bethany Beach are about 2 ½ hours away.