Tyson’s Corner is second only to Manhattan in the amount of retail space. Retailers such as Saks 5th Avenue, Neiman Marcus and Macy’s and many other fine names have established shops there. Tyson’s Corner, VA is also the base for a large host of employers. AT&T, Boeing and IBM are just a few of the corporations that operate from this town.

Fairfax County boasts the largest number of jobs of any county in the Washington DC area, as well as the largest median household income ($84,000) in the United States. It serves as home to the world’s largest amount of technology firms. Global markets are accessed through the Washington Dulles International Airport. 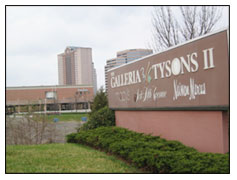 Fairfax County was home to two of American’s visionary leaders, George Washington and George Mason, who led the revolutionary force that shaped the nation. Today’s top leaders in technology are leading in a different kind of revolution, one that will shape the country again. Rich in historical sites, the Tyson’s Corner and Vienna areas are visited by people from all over the world, to view the historical treasures from both the Revolutionary War and the Civil War.

Vienna, VA is host to Wolf Trap Farm Park, the nation’s only national park for the performing arts. The Fairfax Symphony Orchestra plays at the George Mason University Center for the Arts, as well as many other world-renowned musicians and dancers. Vienna and Tyson’s Corner, are only minutes away from the nation’s capital via the Vienna Metro system, within easy reach of the Atlantic Beaches to the east and the Blue Ridge mountains to the west – an exciting and dynamic area to live in.

The climate is mild and moderate, with an average temperature of 53 degrees and only about 40 inches of precipitation per year. The Fairfax County school system has received one of the highest ratings in the nation. From a visionary past to a visionary future, the Tyson’s Corner/Vienna region is one of the most promising in the Washington DC Metropolitan area.