Reston, VA, the largest business district in the state of Virginia, has held true to its founding vision of being a peaceful, serene and healthy place to live. “Living in Reston is like living in a park” is one of the most often heard comments in this town. Reston nestles quietly only 20 miles west of the hub-bub of Washington D.C. Nearly 60,000 residents live within Reston’s boundaries and enjoy the 1900 acres of parks and natural areas, the 69 miles of walking paths and the various lakes and ponds, as well as a 72 acre Nature Sanctuary.

Founded by Robert Simon in the early 60’s, Reston has participated in Fairfax County’s enormous economic growth in the past decades. Reston has managed to retain its natural, outdoors appeal, even being one of only three communities in the nation to be voted a “Community Wildlife Habitat” by the National Wildlife Federation. 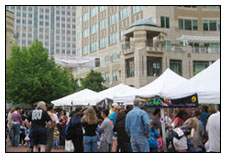 For sports enthusiasts, there are 15 pools, 49 tennis courts, multitudes of ball fields and an ice skating rink in the Reston Town Center. The 20 acre Center is the site for concerts and festivals, and houses 16 restaurants, plus retail shops and a luxury hotel. Only ten miles from the Washington Dulles International Airport, Reston plays host to a large number of regional events such as Oktoberfest and the Northern Virginia Fine Arts Festival.

Reston, VA is known as “a community of the arts.” The Greater Reston Arts Center is one of the foremost visual art institutions in northern Virginia. The League of Reston Artists is a highly active organization that holds exhibits in the Reston Community Center, sharing that space with the Reston Community Players. Culture is a large part of what makes Reston so unique and it also helps to bind the community tightly together. 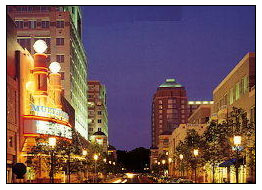 Like all of Fairfax County, Reston Virginia has seen enormous growth in business. Fairfax County has more jobs than any in the Washington D.C. area and also has the largest median household income of any county in the nation. The large populace of highly educated workers is highly attractive to technology firms, the aerospace industry and internet-based companies. The Microsoft Corporation recently opened its Microsoft Innovation and Technology Conference Center at the Reston Town Center.

Reston, VA is strategically located to be an outstanding business community. It is situated along the Dulles Corridor which gives fast access to the Dulles International Airport, Tyson’s Corner – known as Fairfax County’s ‘downtown’ , and to Washington D.C. itself. Reston has excellent transit services that link in to the West Falls Church Metrorail Station and has its own transportation management organization, which is looking to the future and what needs will be arising as the projected growth boom continues.

Reston, VA is one of the most unique and inspiring communities in the Washington D.C. Metropolitan Area. Its commitment to preserving the natural beauty of the land while at the same time moving rapidly forward into our high-tech future could stand as a role model for the surrounding area. The mixture of culture, community caring, unspoiled nature, and a sparkling economic future makes Reston a wonderful and exciting place to live.